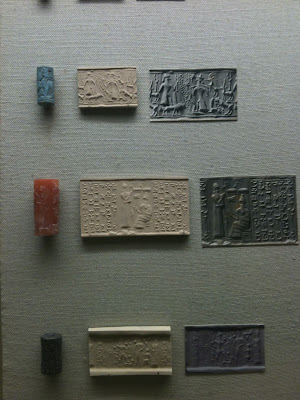 Cylinder seals and modern impression
Mesopotamia
around 14th Century B.C.
Metropolitan Museum
Cradle of Civilization
5th "Live-in" session
Again I had a guided tour, this time to the Ancient Near East. A section rather small on the second floor that otherwise I don't think would have kept my attention for very long. But together with four other enthusiastic learners, among them a young hipster from Singapore who impressed with his added knowledge and a wonderful volunteer who was enthusiastically telling us about the "Cradle of Civilization" it ended up being a great extended hour filled with wonders.
Look at the above seals, these little cylinders had a persons symbolized story on it and by rolling it over it became their signature. They would usually hang it around their neck so it could be used at all time, like a form of identification, amazing. 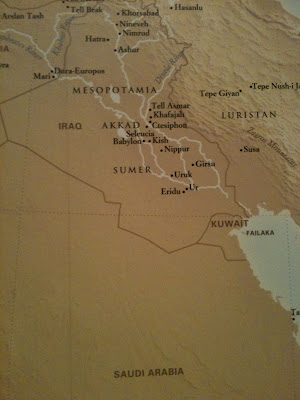 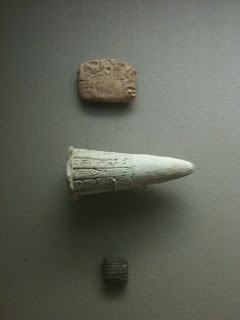 Tablets in Clay
Mesopotamia
Ca. 2000-3000 B.C.
The top tablet is early writing about wheat and barley quantities. The Mesopotamian land had a rich soil and was easy to farm and barley was often used as payment to the workers. Early on they learned how to control the rivers for irrigation. Flooding though could be extremely destructive and put a lot of stress on the people. They reached for the Gods for help. The temple was the God of the city and the main job of the ruler was to nourish the relationship with the Gods. 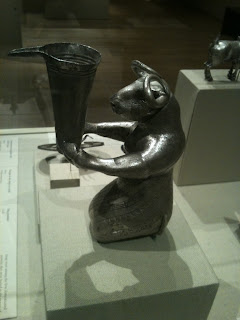 This little figure has it's face covered by its offering, so you are interestingly forced to look at it from it's side. Seemingly something common from what I saw, most of the pieces looked best from the side. 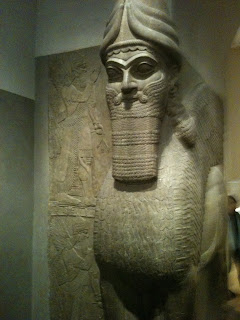 the entrance to the Northwest Palace
of Ashurnasirpal II At Nimrud
883-859 B.C.
If you ever go and look at these horse/humans guarding the palace, look at the legs. The horses has five legs so it would look beautiful from both the front and the side. 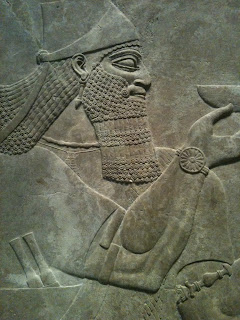 Part of the wall inside the castle 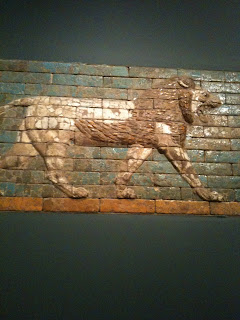 The Professional way
Babylon
glazed Lion panel
(1792-1750 B.C.)
From the panels leading through the massive gate from the Temple of Marduk (city god of Babylon) to the Bit Akitu, the temple of the New Years festival. 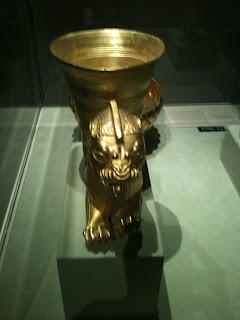 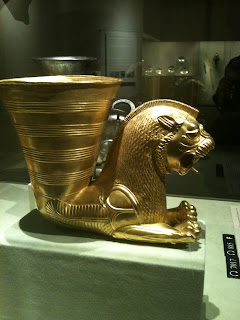 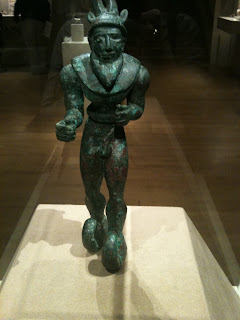 Striding figure with ibex horns, a raptor skin draped around the shoulders and upturned boots
Arsenical copper
Iran or Mesopotamia
ca. 3000 B.C.
Created around the time of the first Sumerian cities emerged, when the figures began to represent more the human shape. With the triple belt and the beard this one is supposed to represent a royal or divine human being. Quite a bit of a demonic looking royal i would say. 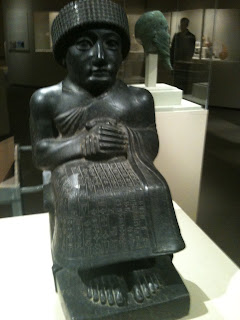 Statue of Gudea
Diorite
Mesopotamia
Ca. 2150 B.C.
This figure makes me think of peace. The seated pose with the hands folded is a traditional gesture of greeting and attentiveness. Parts of the inscription says:
"Gudea, the man who built the temple, may his life be long" 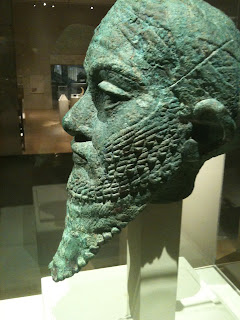 Head of a ruler
Arsenical copper
Iran (?)
2300-2000 B.C.
To read more about this head and theories of it being Ur-Namma here:
Sumerian Shakespeare.
You will notice my picture:) 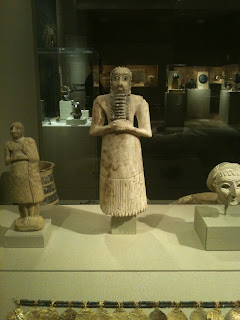 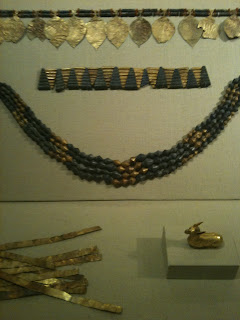 The Royal Cemetery at Ur
(ca. 2600-2200 B.C.)
In these burial cites (part of hundreds) that probably belonged to the royal family of Ur, the deceased were buried with male and female guards and attendants in full dress and with chariots drawn by equids and oxen. A great source for illuminating life and customs in Sumer. I think the rest of the burial site is in Pennsylvania and at the British Museum. 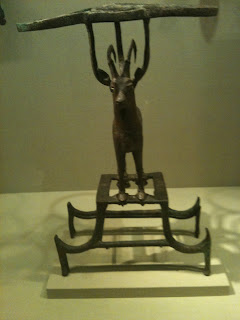 Vessel stand with ibex support
Copper alloy, inlaid with shell and lapis lazuli
Mesopotamia
(Early Dynastic III 2600-2350 B.C.)
This stand was probably used for incense or offerings at a ritual. 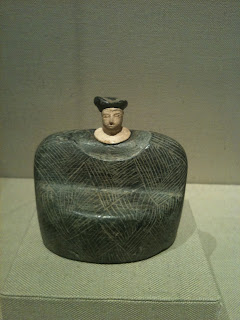 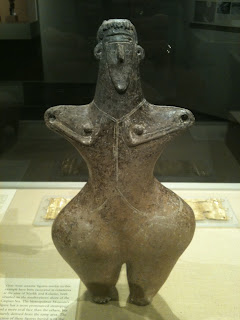 Statuette of a female
Ceramic
Northwestern Iran, Caspian region
(Early 1st millenium B.C.)
Do you remember the Cycladic female? with the large wonderful buttocks. The Caspians put it all in the hips:) 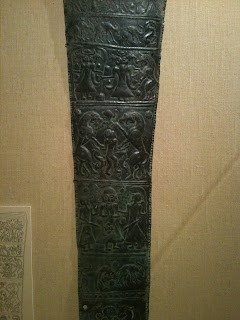 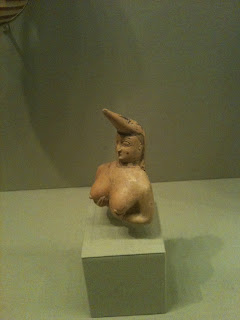 Vessel fragment in the form of nude female
Ceramic, paint
Southwestern Iran
Neo-Elamite period (8th - 7th Century B.C.)
I had a sigh of relief when I noticed this one. Somehow a little humor and sensuality does not hurt while you are out to learn. 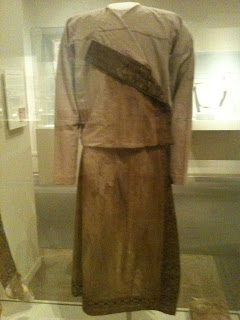 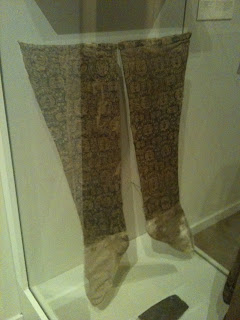 Clothing from a horseman along the Silk Road
The Silk Road was the trade routes that connected the East, South and Western Asia with the Mediterranean world, also North and Northeast Africa and Europe. The word stemming from Chinese silk trade from over 3000 years back in time.
Next up in the "Live-in Sessions" is the Oceanic Room and I can´t wait to tell you all about it. Impressive!
With Love
Kristin

Email ThisBlogThis!Share to TwitterShare to FacebookShare to Pinterest
Labels: Metropolitan